Edible Mushrooms In Arkansas : A Guide 2023 If you are looking to explore the culinary and medicinal benefits of edible mushrooms in the state of Arkansas, then you have come to the right place. Arkansas is home to a diverse range of species of edible mushrooms and fungi, each of which can be a source of incredible nutritional value, flavor, and texture. Mushrooms have been used for centuries as a source of nutrition and medicine, so understanding the various species and how to identify them is essential.

This guide will walk you through the fundamentals of edible mushrooms in Arkansas, from identifying the species to preparing and cooking them. We’ll also discuss the safety considerations associated with foraging for wild mushrooms and how to use them for culinary and medicinal purposes. By the end of this guide, you will have a greater understanding of the edible mushrooms in Arkansas and how to use them to enhance your meals.

When cooked, they become soft and buttery, and can be used to add flavor to salads, soups, sauces, and pasta dishes. Additionally, they can also be dried, preserved, and frozen for later use. Chanterelles are an excellent source of dietary fiber, vitamins, and minerals, making them a nutritious and delicious addition to any meal.

Morel mushrooms are one of the most prized edible varieties in Arkansas, and they can be found during the spring months in wooded areas near rivers and streams. They have a spongy, honeycomb-like cap and a hollow stem, and they can grow to be up to 4 inches wide.

These mushrooms have an earthy, nutty flavor and they can be cooked in a variety of ways. However, they should be cooked thoroughly before eating as they can contain toxins when consumed raw. Morels can be preserved by drying or freezing, so they can be enjoyed even when they’re out of season.

Oyster mushrooms are a type of edible, gilled mushroom found in Arkansas. They are easily identified by their fan-shaped caps, which are white, gray, tan or yellow in color. The undersides of the caps are lined with gills. The stem of an oyster mushroom can range from white to shades of gray or brown.

Oyster mushrooms are commonly found on dead or decaying trees or logs, but may also grow on the ground in rich soil. When cooked, they have a mild, slightly sweet flavor. Oyster mushrooms can be cooked in a variety of ways, including sautéing, baking, and grilling. 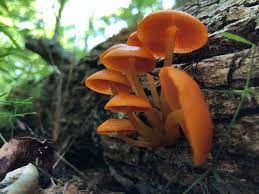 4. Hen of the Woods Mushrooms

Hen of the Woods (Grifola frondosa) is one of the most prized edible mushrooms in Arkansas. It is also called “maitake” or “sheep’s head”, and is easily recognized by its fan-shaped, gray-brown caps and its “hen-like” appearance. Hen of the Woods is an excellent source of vitamins, minerals and proteins.

It can be found growing at the base of oak trees, in disturbed soils, and in pastures near roadways. It is a choice edible mushroom and its flavor is said to be mild and slightly sweet. Hen of the Woods is a great addition to many dishes, including omelets, soups, and risottos.

Shaggy Mane Mushrooms (Coprinus comatus) are edible mushrooms found growing in grassy fields, or sometimes even in urban areas. These mushrooms are easily identifiable by their large white-gray caps, which are covered in shaggy scales. Their white stalks grow up to 6 inches tall, and the caps of mature mushrooms can reach up to 4 inches in diameter.

The caps will eventually darken and dissolve into a black and inky liquid, which is why they are sometimes referred to as inky caps. Shaggy mane mushrooms are best cooked when they are young and the caps are still white and firm.

All in all, edible mushrooms in Arkansas offer a wide variety of flavors and textures. With a little bit of knowledge and research, one can easily identify the edible mushrooms and incorporate them into meals. For those who are new to foraging for mushrooms, it is important to be sure of the identification and to be careful when harvesting them. With a bit of practice, anyone can become an expert mushroom hunter in no time.

Campgrounds In Northwest Arkansas : A Guide 2023

If you are looking to explore nature and the great outdoors, Northwest Arkansas is a great place to start. Boasting an array of hiking...
Travel

How Fast Can An Alligator Run? :Ultimate Guide 2023

It is not uncommon to wonder how fast an alligator can run; after all, they are one of the most feared predators in the...
Travel

Welcome to a guide to one of the most unique and exciting tourist destinations in the world – Pizza Hot Springs. Located in the...
Travel

Alligators In Arkansas : A Guide 2023

Arkansas is home to a variety of wildlife, from the majestic bird life of the Ozarks to the small mammals found throughout the state;...
Travel

Yurts In Arkansas : A Complete Guide 2023

In the rolling hills of Arkansas, yurts are fast becoming a popular lodging option for a variety of travelers. With the state's ample camping...
Previous article
How Fast Can An Alligator Run? :Ultimate Guide 2023
Next article
Campgrounds In Northwest Arkansas : A Guide 2023

Discover the world through our online travel magazine. From adventure and culture to luxury and relaxation, we have all your travel needs covered. Join us on an epic journey of discovery and inspiration.